In this website a series of photo's of ephemeral gullies is shown from South Limbourg, the Netherlands, an area with an undulating topography and loess soils. 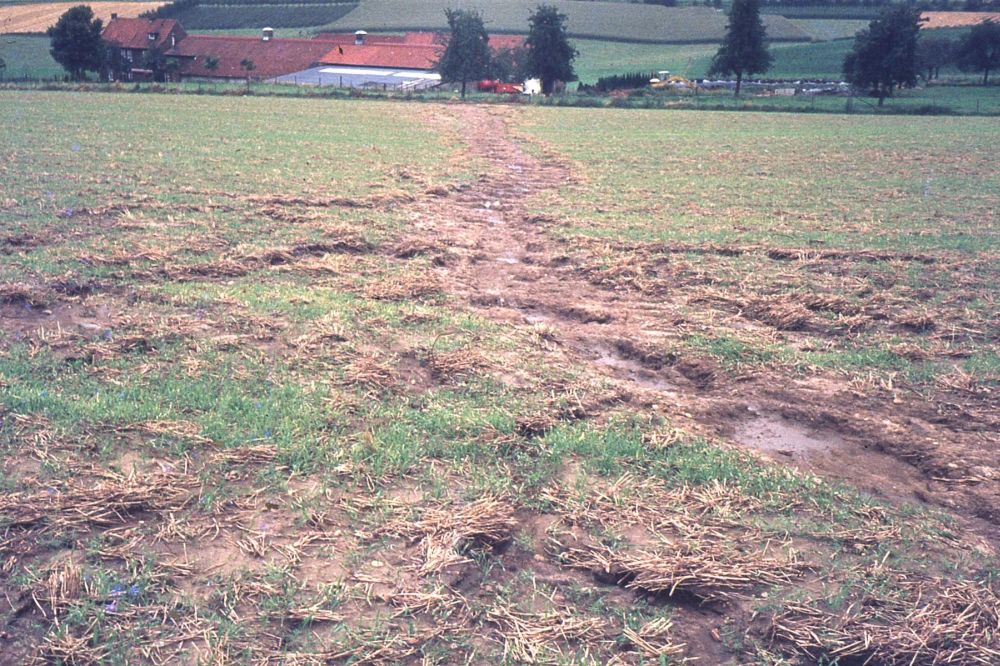 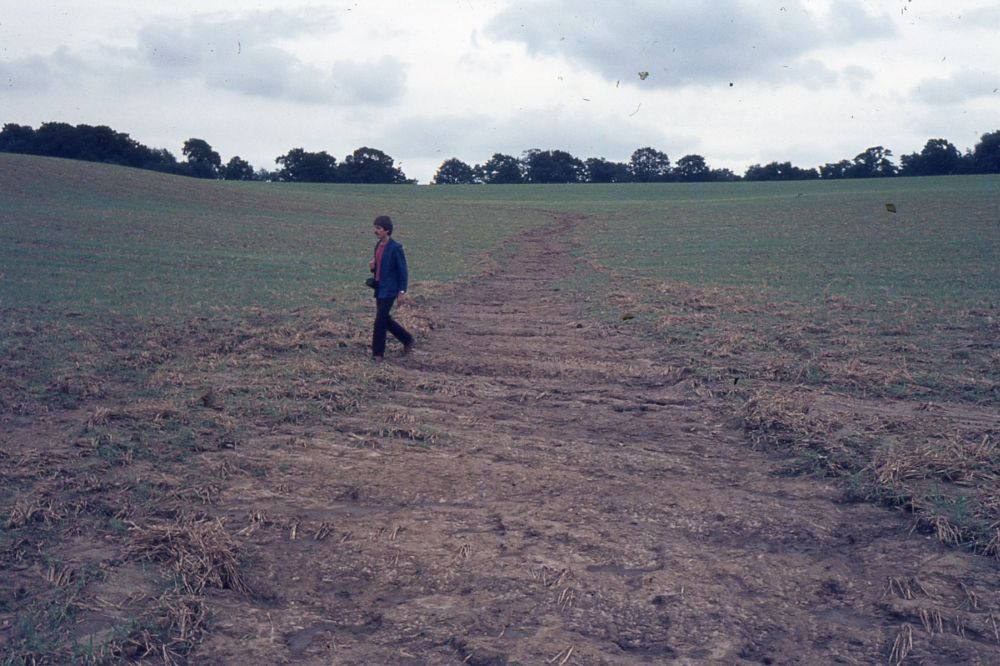 View upslope of an ephemeral gully. 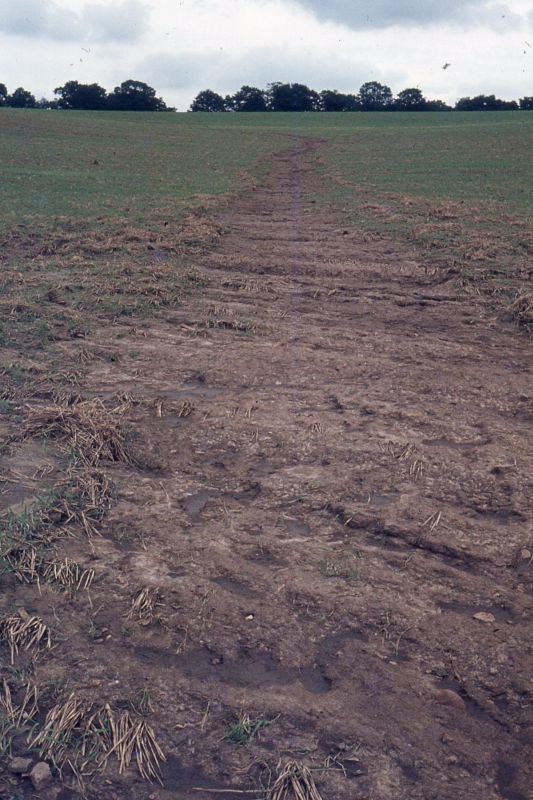 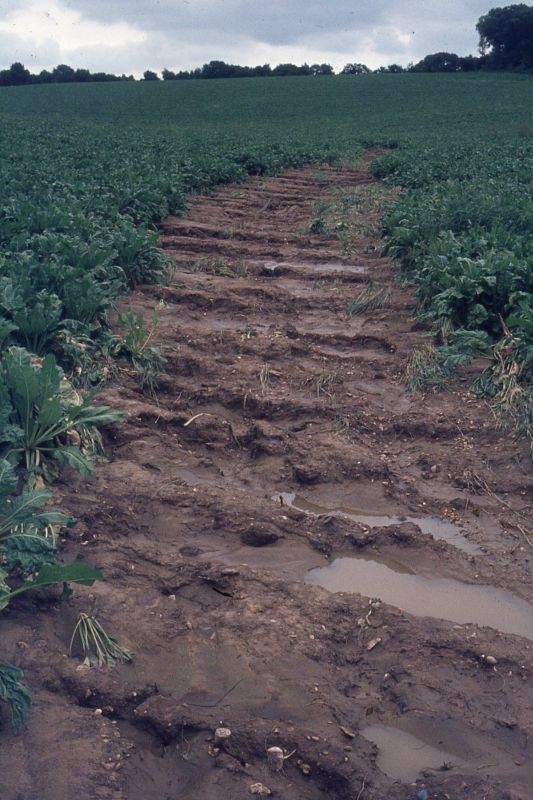 Uprooting of crop (sugarbeets) by an ephemeral gully. 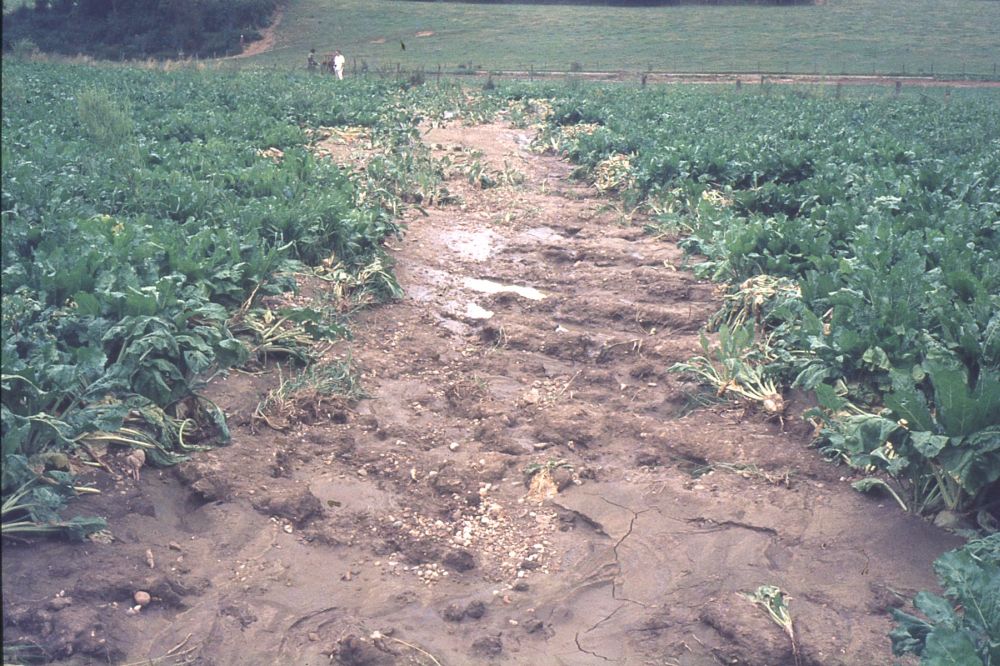 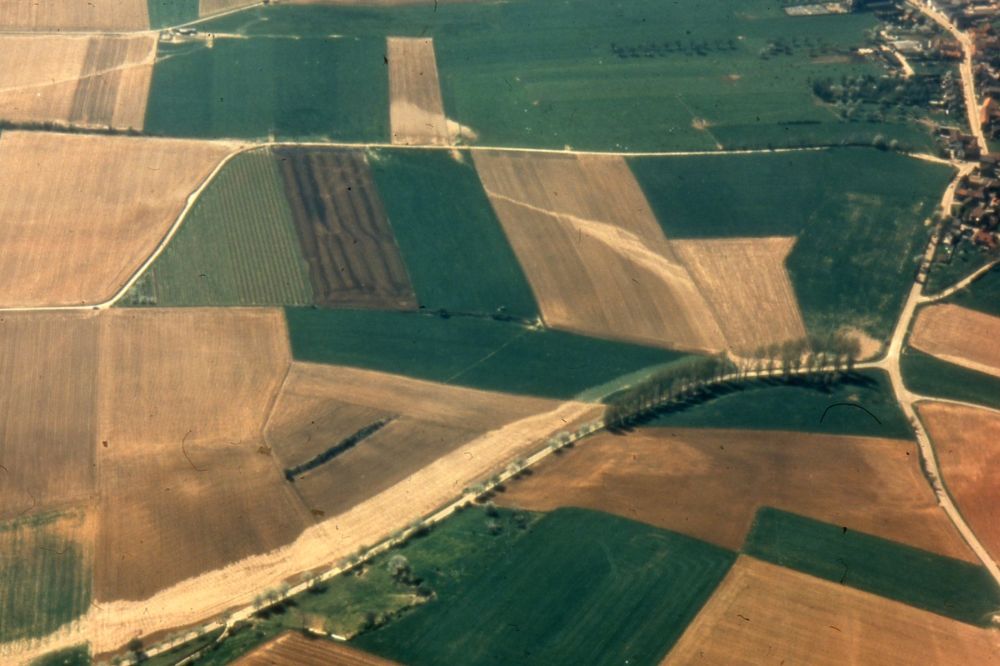 This and the next eight pictures are of an event of 55 mm of rain in 2 hours incl. 30 mm in 30 minutes. The aerial photographs of the event were taken by D. Koeman. The location is the Ransdalerveld, South Limbourg, The Netherlands. The width of the road (Vrakelbergerweg) alongside the gully is appr. 4 m. Notice that a cropped field was not eroded by the gully, showing that a crop can protect the soil. 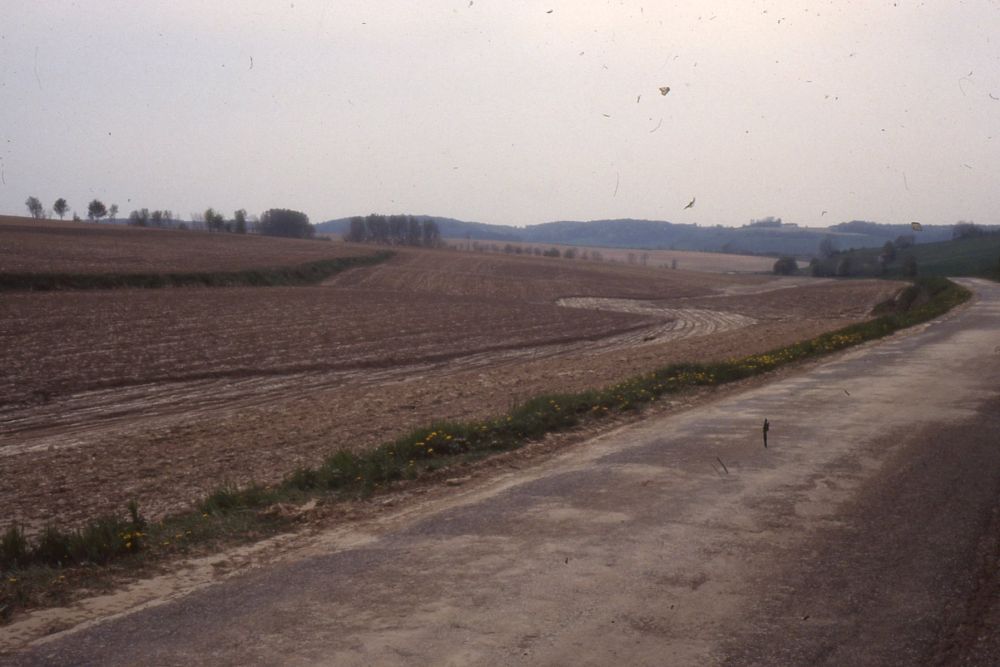 The ephemeral gully follows the course of a dry valley bottom along de Vrakelbergerweg. 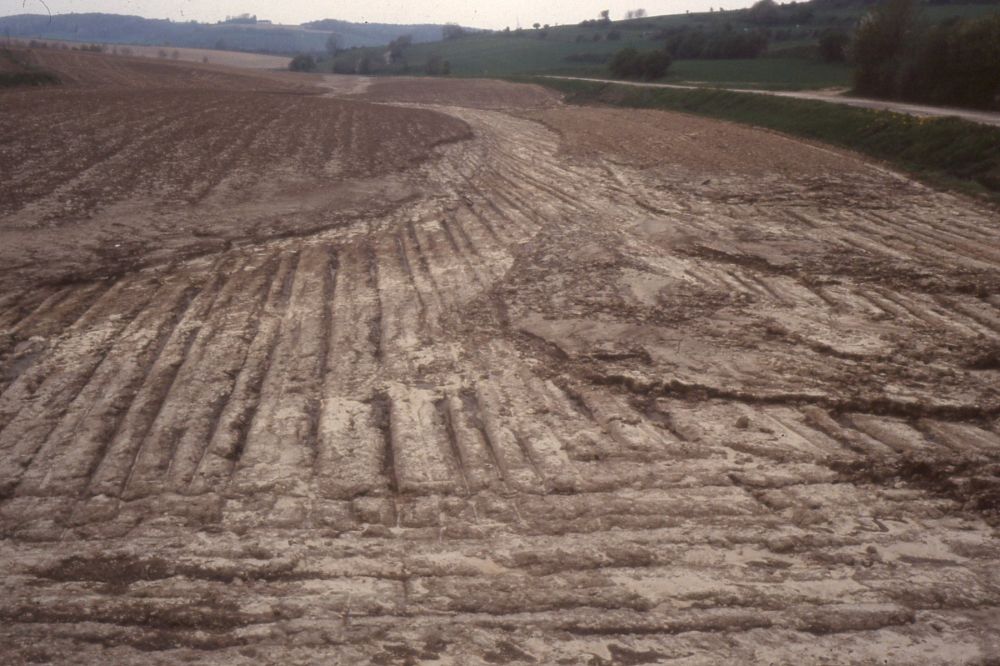 The ephemeral gully has removed the plough layer of a recently ploughed field. 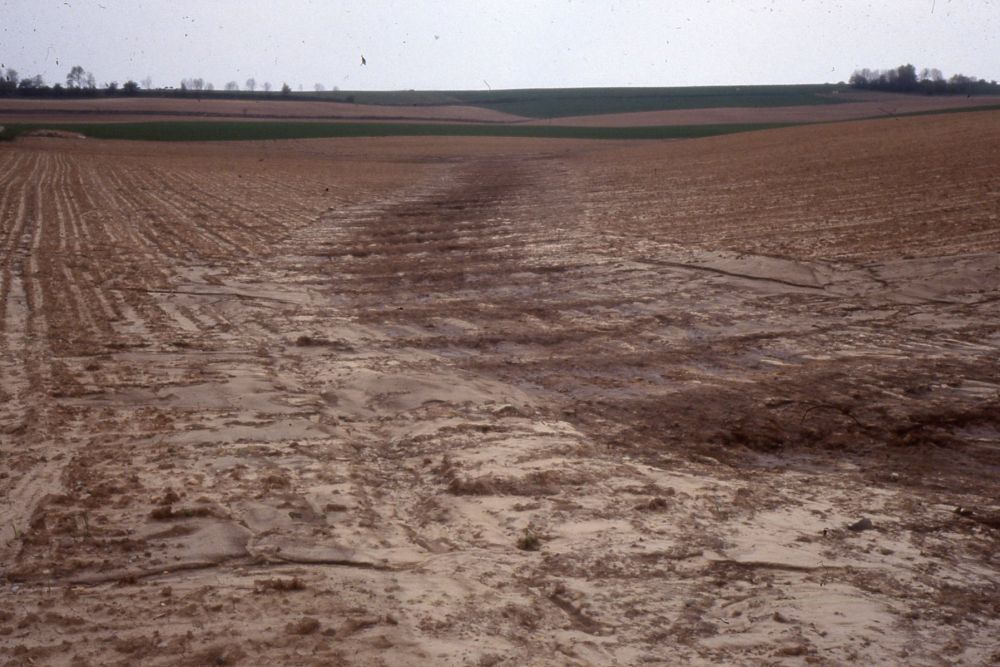 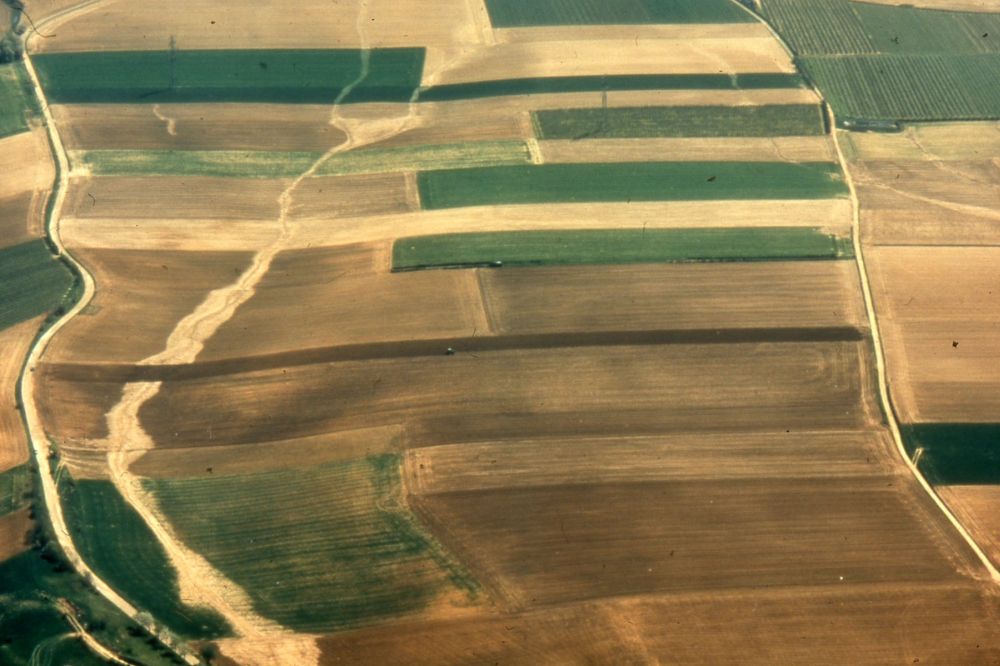 Notice the dark narrow strip from left to right in the middle of the photo were the farmer has just begun to plough a field, removing the gully in doing so. The cropped field in the lower left hand corner was eroded by the gully. This was not everywhere the case during this event. See the upper part of the photo and the aerial photo's above and below. The direction of the tillage furrows was perpendicular to the gully. 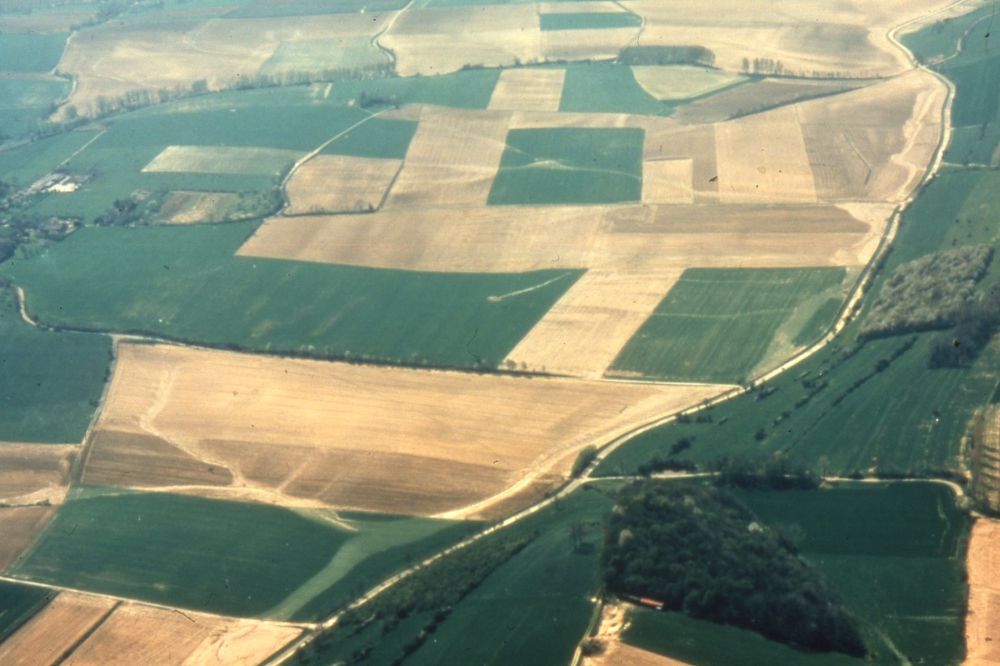 The water flow has crossed two cropped fields without disturbing the crop. 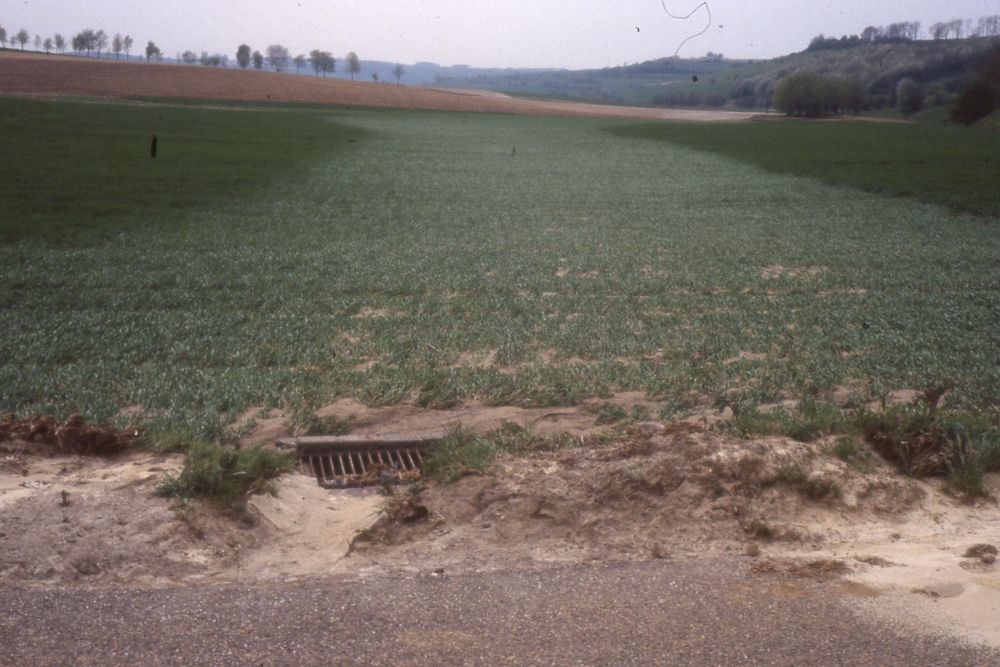 The water flow has crossed a cropped field without eroding the soil and the crop, showing that a crop can protect the soil. It is surprising to see that there are hardly any signs of mud deposition in the field. 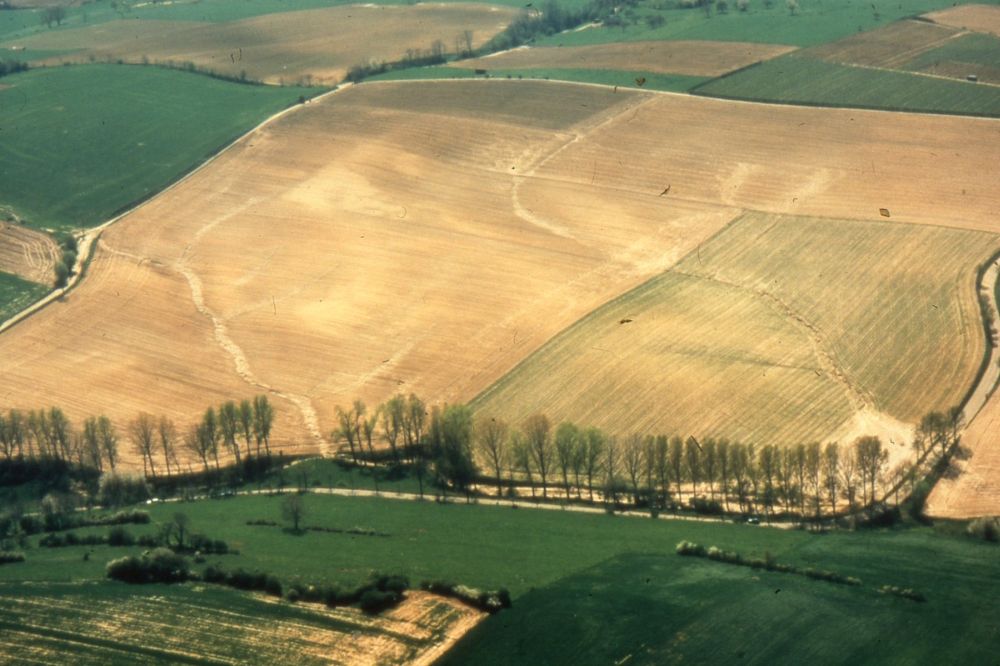 Same event and general area as the pictures above. The colluvial fan in the bend of the road is shown in the next photo. 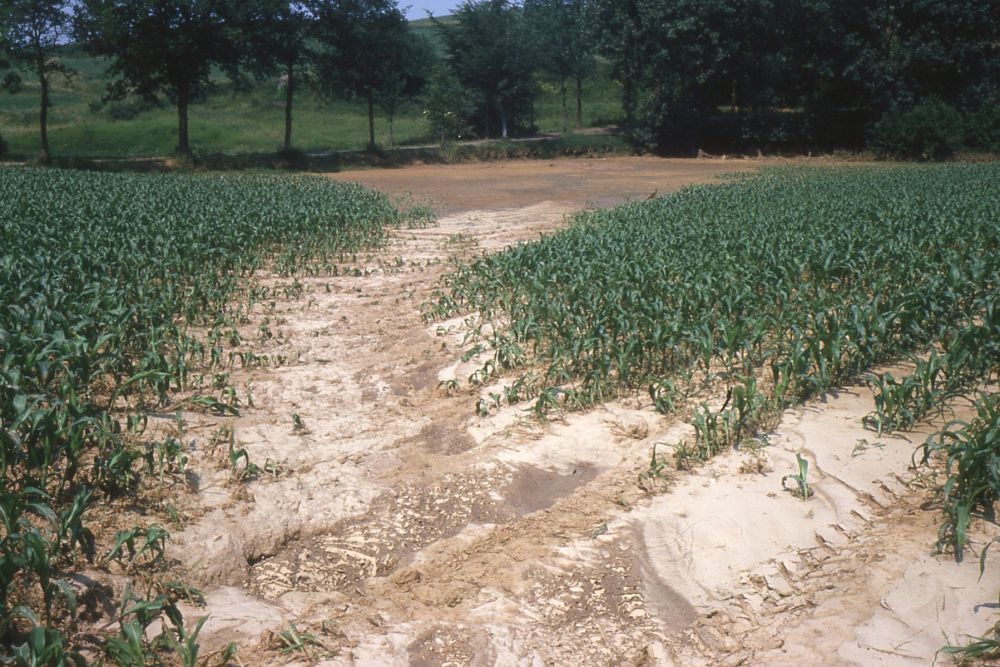 Ephemeral gully crossing a corn (maize) field ending in a colluvial fan at a road side (see photo above). 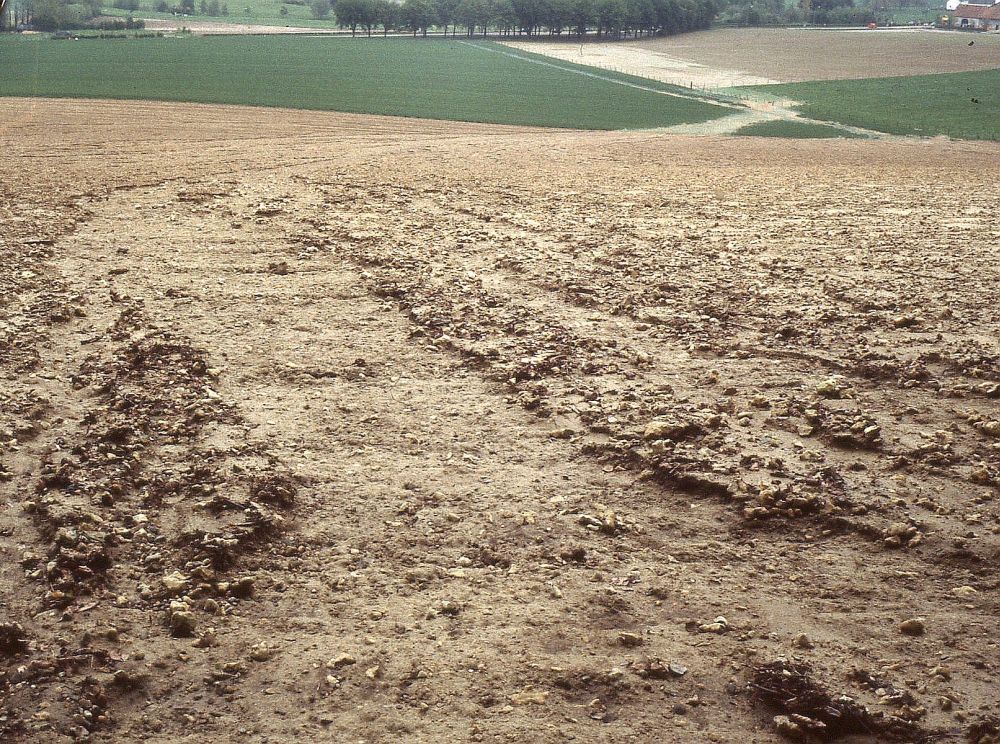 This slide and the following slides show ephemeral gullies from another event than the one above (South Limbourg, The Netherlands). The soil contains rounded gravel from the river Meuse (a so called river terrace deposit). 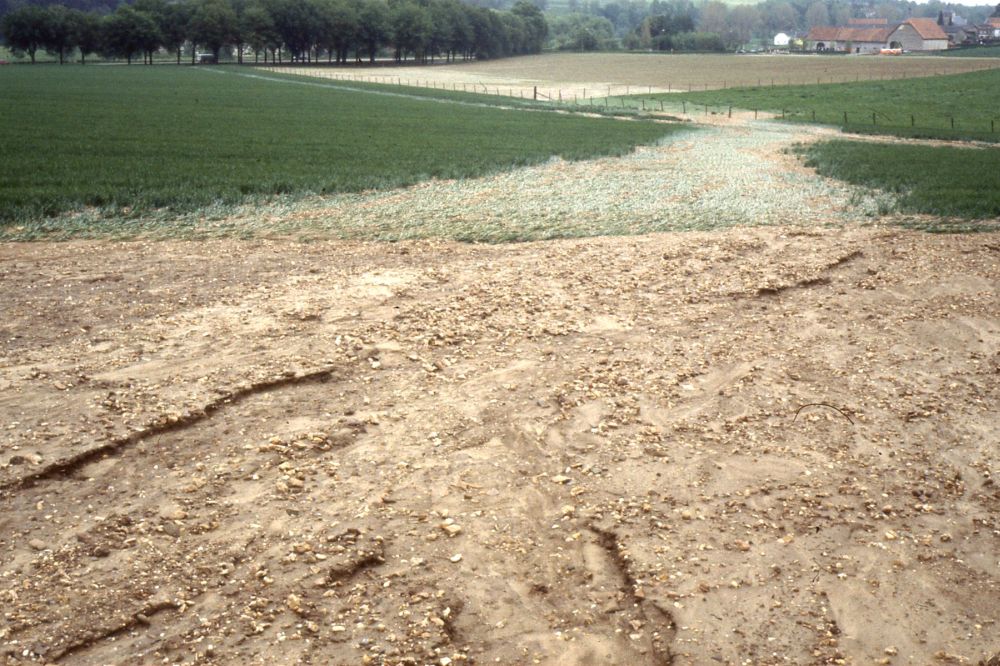 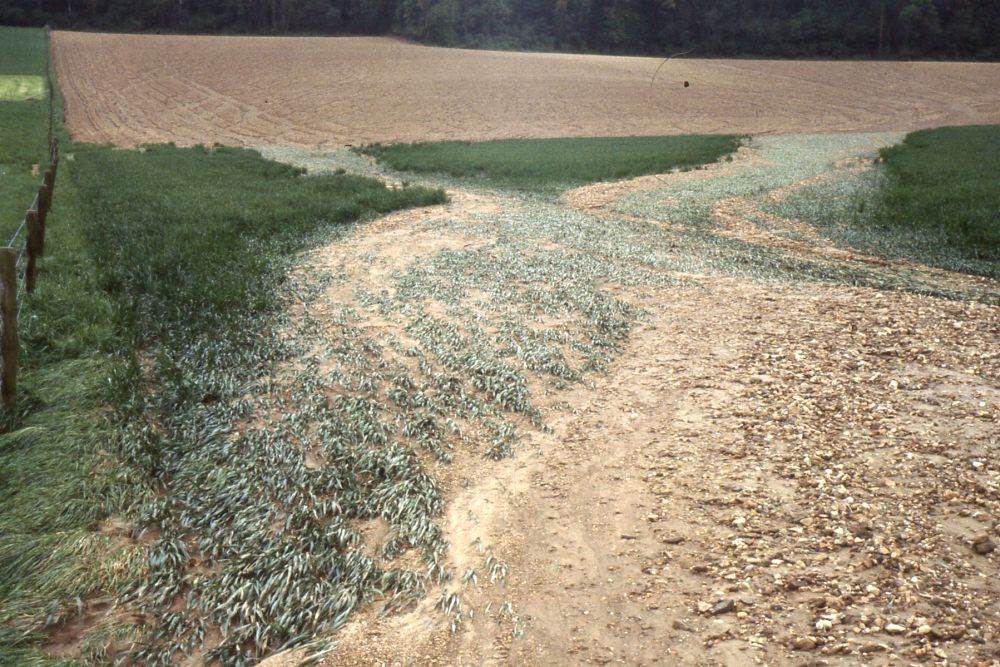 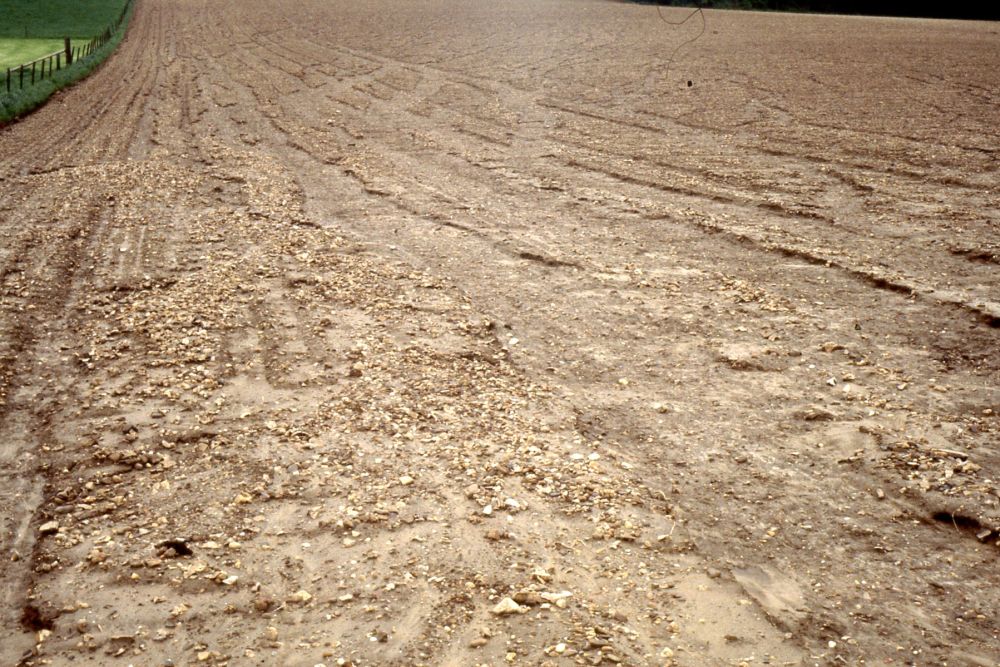 Photo showing the left part of the bare field of the picture above. 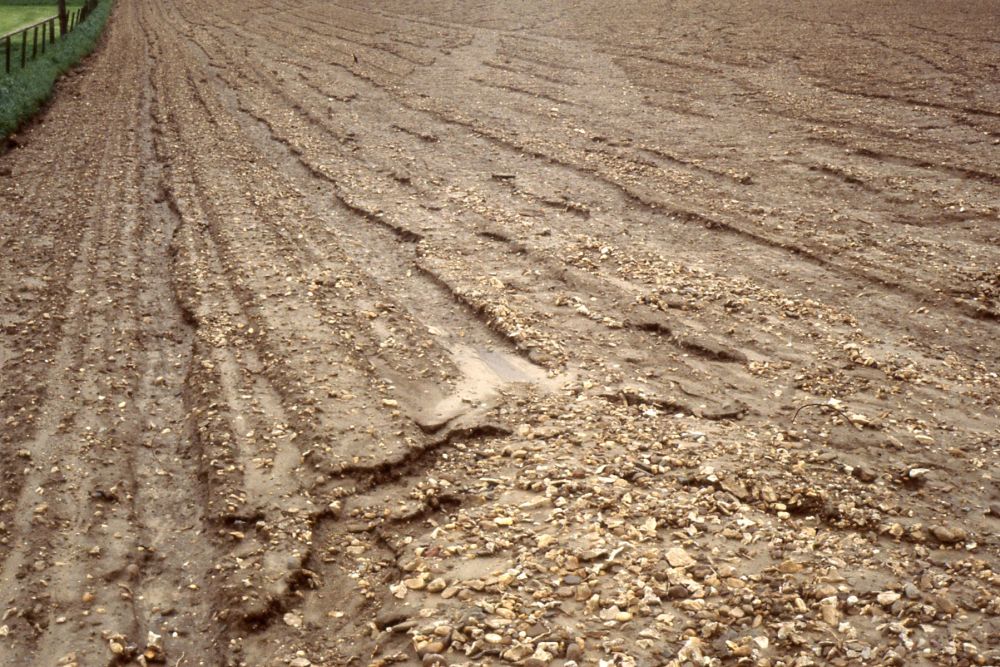 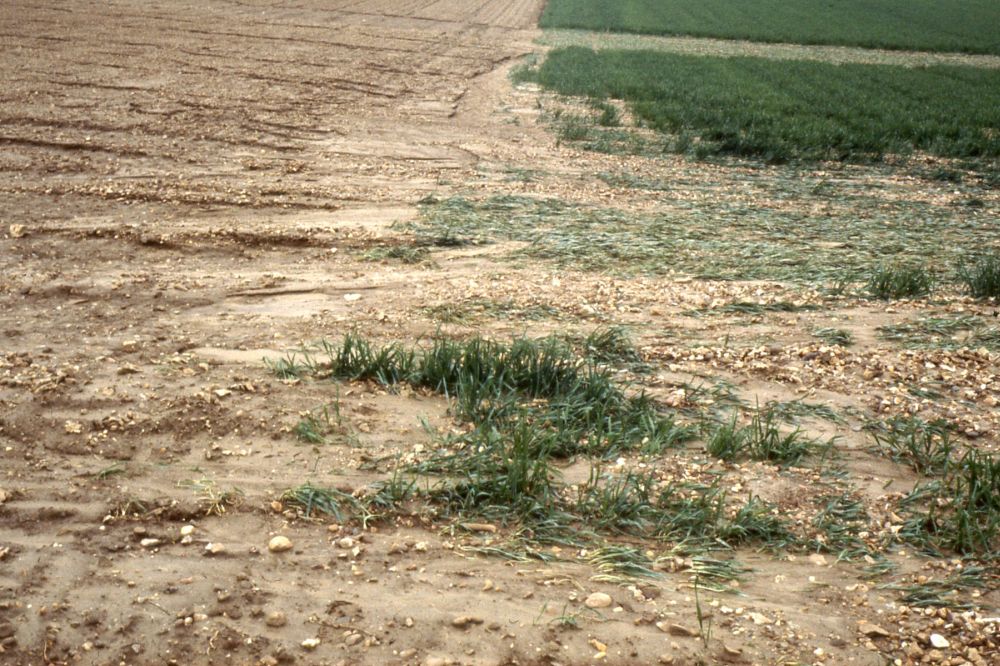 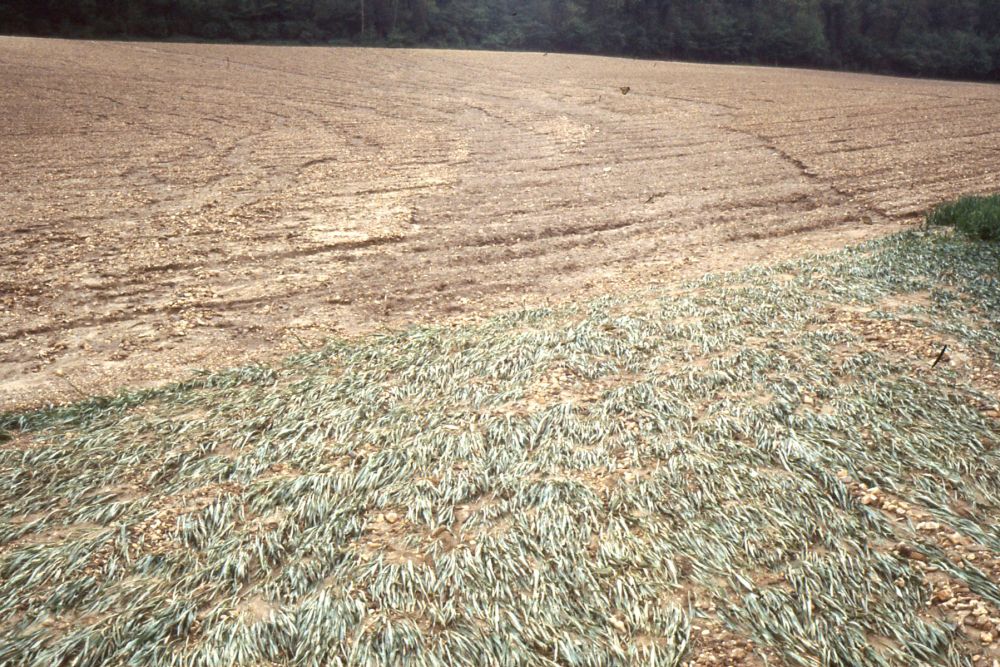 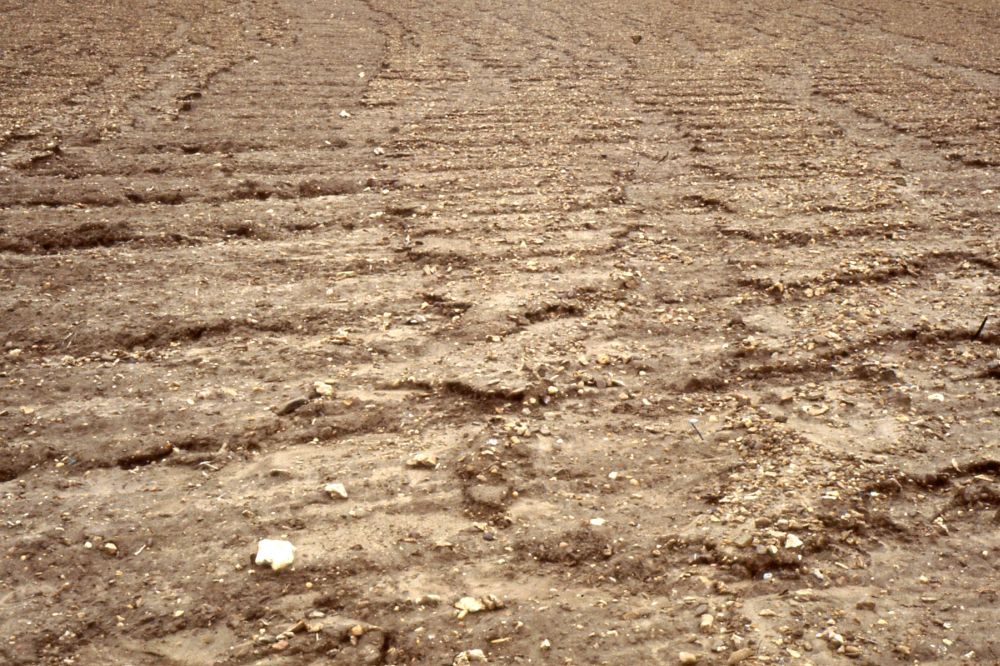 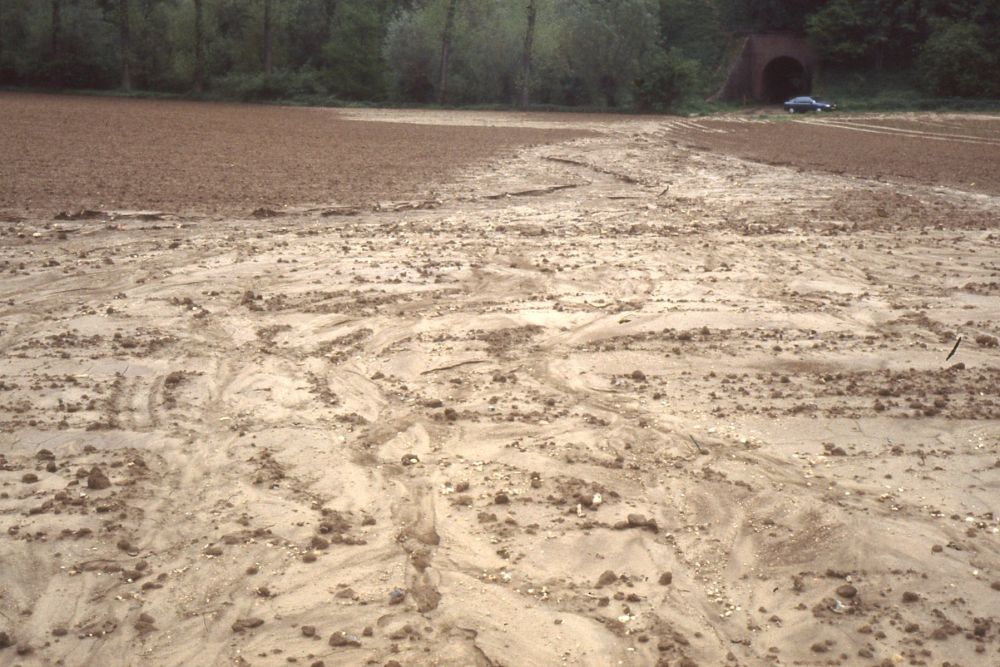 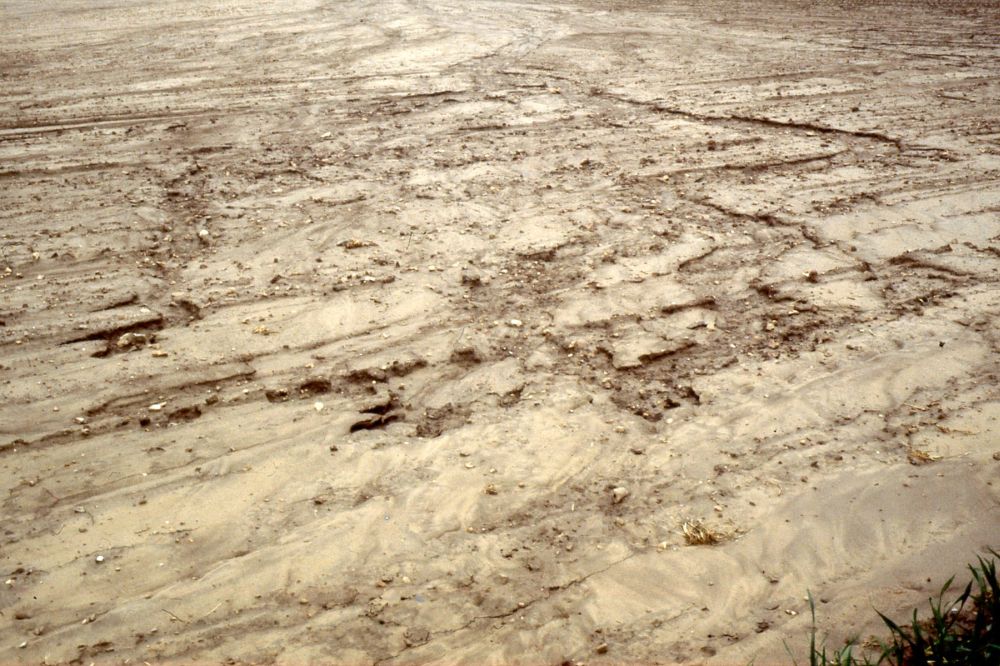 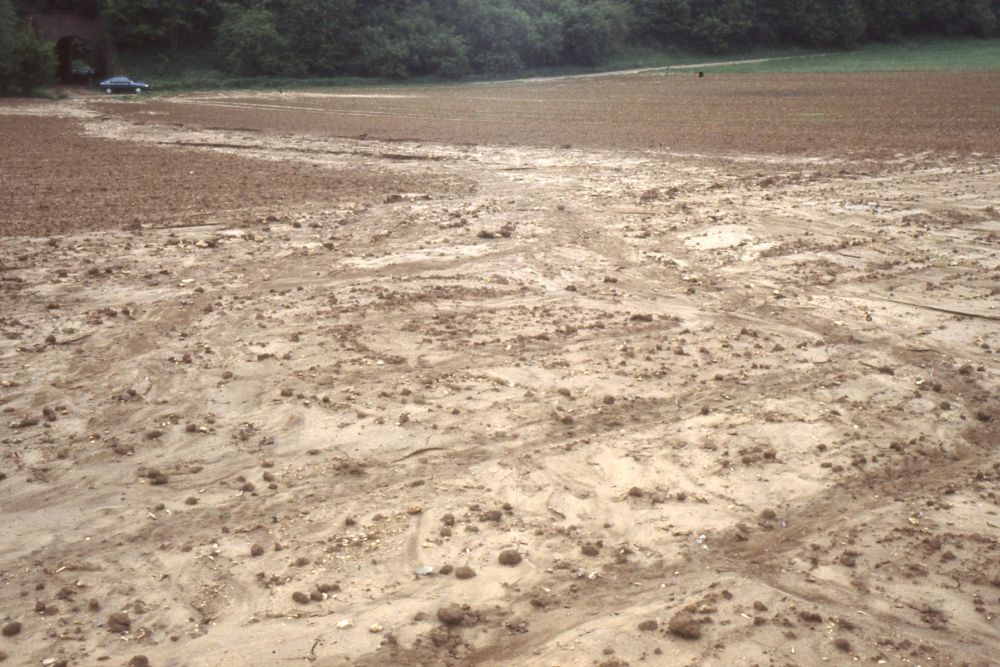 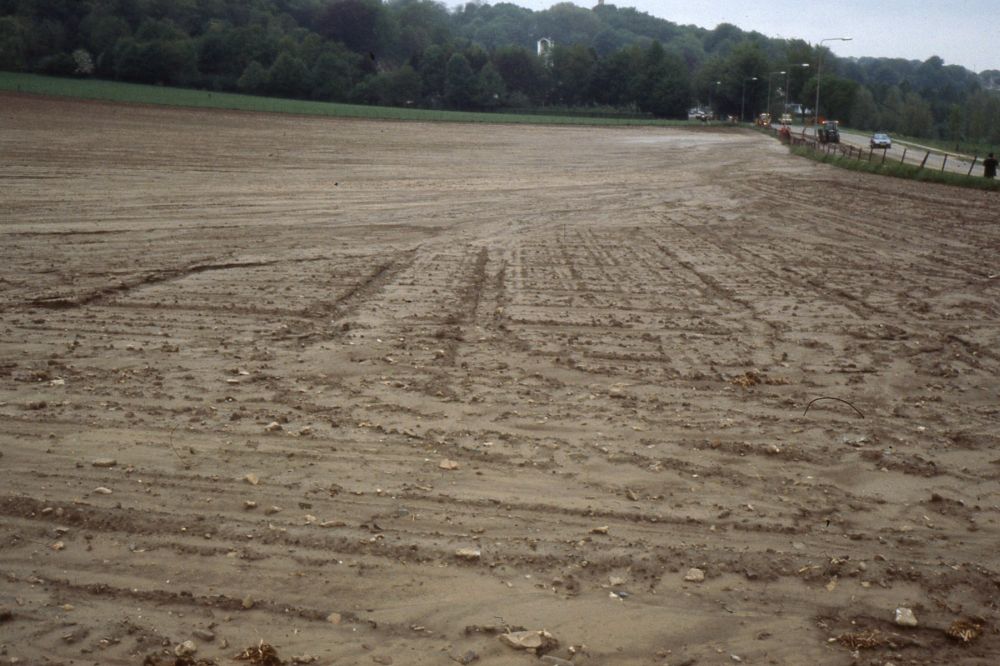 Deposit left by an ephemeral gully. Mud is removed from the road.

The copyright of the photographs on this website is owned by F.J.P.M. Kwaad.